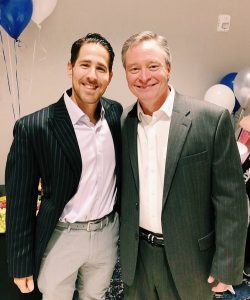 Luxe is a story of ironies and plot twist. When Dr. Hudgins was completing a tertiary externship in Texas, he became friends with two fellow students, Felix and Neil. Felix hailed from Cuba and was completing his oculo-facial plastic fellowship and Neil, a native of Texas, was completing his fellowship in cornea and external disease. Felix and Dr. Hudgins explored plans of practicing together and blending the specialties of oculo-facial plastic and optometry as they saw these two disciplines being symbiotic. However, as life has a way of changing things, this did not happen. Felix became happily married and remained in Texas and Dr. Hudgins returned to his native North Carolina to join a private optometric practice.

After a year in private practice, Dr. Hudgins was approached by a multi-disciplinary eye surgical group to assist their, interestingly, oculo-facial plastic specialist. Dr. Hudgins was recommended by none other than Neil, who was now practicing at the same surgical group in NC. Dr. Hudgins went on to work part-time assisting this oculo-facial plastic specialist for 14 years. After which, he decided to commit full time to his private practice in Raleigh, NC.

The lease for the location of Dr. Hudgins private practice was expiring January 31, 2019 and a decision had to be made on the future of his practice and the direction in which he wanted to focus patient care. During this development phase, Dr. Hudgins started consulting with a fellow colleague about what direction he should take his practice. After multiple meetings, Dr. Hudgins and this practitioner formed a close kinship and started exploring the possibility of blending their disciplines as they saw them as being symbiotic.

Have you seen the ironies? The colleague Dr. Hudgins was consulting with was Dr. Renzo Zaldivar, who hails from Cuba and is an oculo-facial plastic specialist. Approximately 25 years earlier, the concept of this practice was in its genesis. Finally, after years of hard work and willingness to explore new technologies, ideas, and patient care methodology, Dr. Zaldivar and Dr. Hudgins have been able to develop and bring the concept of ‘Luxe Aesthetics and Dry Eye Center of NC’ to life.